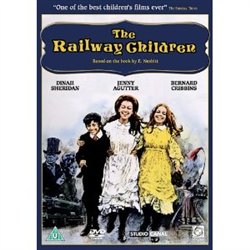 The well to-do Waterbury family is turned upside down when their father is taken from their home under mysterious circumstances. Mother (Dinah Sheridan) explains nothing except that father has had to go away, and with her children moves to a humble house in the country. The three Waterbury children occupy their time by waving to trains, which leads to a number of adventures. Young Peter (Gary Warren) learns that stealing coal is wrong, even if mother is cold. Phyllis (Sally Thomsett of Straw Dogs) is a tag-along without much imagination of her own, but the oldest daughter Bobbie (Jenny Agutter) learns more about the disappearance of her father, and handles every problem as if it might help get him back.

The popular novel The Railway Children is one of those stories about plucky kids in Edwardian England, the kind of tale one expects to see handled in a more frivolous manner. If done by Disney, it would be a musical with adults who act like children and children who act like idiots. The leads would be big star personalities, that would warp the original story all out of proportion.

Actor Lionel Jeffries was a familiar second-string buffoon in Peter Sellers movies before he became better known in larger roles in First Men IN the Moon and Camelot. He was also in the overblown Chitty Chitty Bang Bang, a fantasy that adheres to everything wrong with 'children's films'.

The Railway Children was Jeffries first film as a director, and his good taste in hewing closely to the modest lines of the book is matched only by his direction of actors. The performances here are all good, in a way that shows a delicate directors control.

Every character is a surprise. Dinah Sheridan is the virtuous mother who tries to keep the tragedy from her children, and only becomes upset when she thinks they're out begging for charity. Bernard Cribbins is the proud railway porter with a house-full of kids, but he's never mined for quaint character schtick, or to make easy statements about class. William Mervyn is the rail tycoon who takes an interest in the kids; Jeffries handles this part of the story so well, we never resent the fact that our kid heroes have a millionaire on their side.

Nobody reaches for tears or easy emotional effects, so the story never becomes mawkish. Mom is caught crying once by herself, and is left to her privacy. Potential emotional scenes are subverted, as when the Russian refugee's family is found. We cut to a long shot of his happy exit by train, and the feeling of goodwill is sublimated back into the story, instead of being squandered in a tearful release.

At the center of The Railway Children is Jenny Agutter, who is a marvel to watch and the real star of the show, even with 5th place billing. The quiet intelligence and positive attitude on her sensitive face make her the perfect heroine. She wears no makeup to suppress her beauty, and seems all the more beautiful for it. Most of the adventures are really hers, as her younger siblings are only helpers and cheerleaders. The enforced move to the cold countryside is a catalyst that forces her to think and act as an adult.

Agutter is marvelous, whether flagging down a train headed for trouble, or carefully mending misunderstandings with the neighbors. Her interactions with the rich gentleman on the train bring back the nostalgic notion that perhaps there once was a time when people communicated with such direct sincerity. The Railway Children has no outrageously exaggerated story points, and the kids remain kids and not superheroes. But in the bright and hopeful 1905 world presented by Lionel Jeffries, all things seem possible.

The scene I remembered all these years is a simple birthday party for Bobbie, the only time Jeffries uses camera tricks to get an effect. Bobbie opens the door to find her family and friends greeting her with a cake and gifts, and a flush of barely contained delight comes across her face. She glides from one guest to another, speechless and grateful, and the camera helps express her boundless happiness. It's one of the most beautiful scenes of its kind, ever.

The underplaying of the obvious also gives power to a late episode where the Waterburys nurse a prep school boy with a broken leg. No special attention is given to romantic sparks between him and Bobbie, but the beginnings are there in their farewell. That, and in the gleam in Bobbie's eye at the end of the hilariously feeble puppet show they put on for their guest.

Helping enormously are Arthur Ibbetsons camera and Johnny Douglas musical score. Both are pretty but never precious. Douglas tunes only become predictable when they try to hype the light comedy moments - his adventure and dramatic themes are terrific. The whole movie has the slightly rosy feel of old events softened and sweetened by memory. Its even better than I remembered it, something that doesnt often happen when rediscovering old pictures.

Still considered a national treasure in England, but virtually unknown here, The Railway Children is on the British Film Institute's list of 100 Best British films. The warmth and good will Jeffries creates is so strong, he can afford to have a Valentine-like last shot, with his cast breaking character to say farewell to the movie audience.