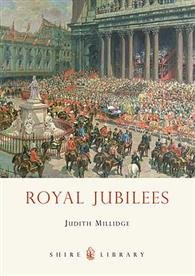 Shire Library 698
Author: Judith Millidge
About this bookIn 1809, thanksgiving ceremonies and feasts across Britain ushered George III into his fiftieth year as king. This was the first British celebration of a royal jubilee and set the tone for the five that have followed since: processions, fireworks, construction of monuments, the striking of special coins and medals, and, of course, the sale of commemorative mugs. Queen Victoria marked her golden and diamond jubilees in 1887 and 1897 amid throngs of patriotic subjects from all over the world, and celebrations were also held for George Vs silver jubilee in 1935. Following the festivities in 1977 and 2002, Queen Elizabeth II is the first British monarch ever to celebrate her third jubilee, as she begins her seventh decade on the throne. Judith Millidge describes the handful of British royal jubilees across 200 years, examines how they have been commemorated, their similarities and differences, and the myriad souvenir products that have accompanied them.
Contents
Introduction
The National Jubilee, 1809
Queen Victorias Jubilees
The Silver Jubilee of George V, 1935
The Jubilees of Elizabeth II
Further Reading
Places to Visit
Index
Paperback; April 2012; 64 pages; ISBN: 9780747811671